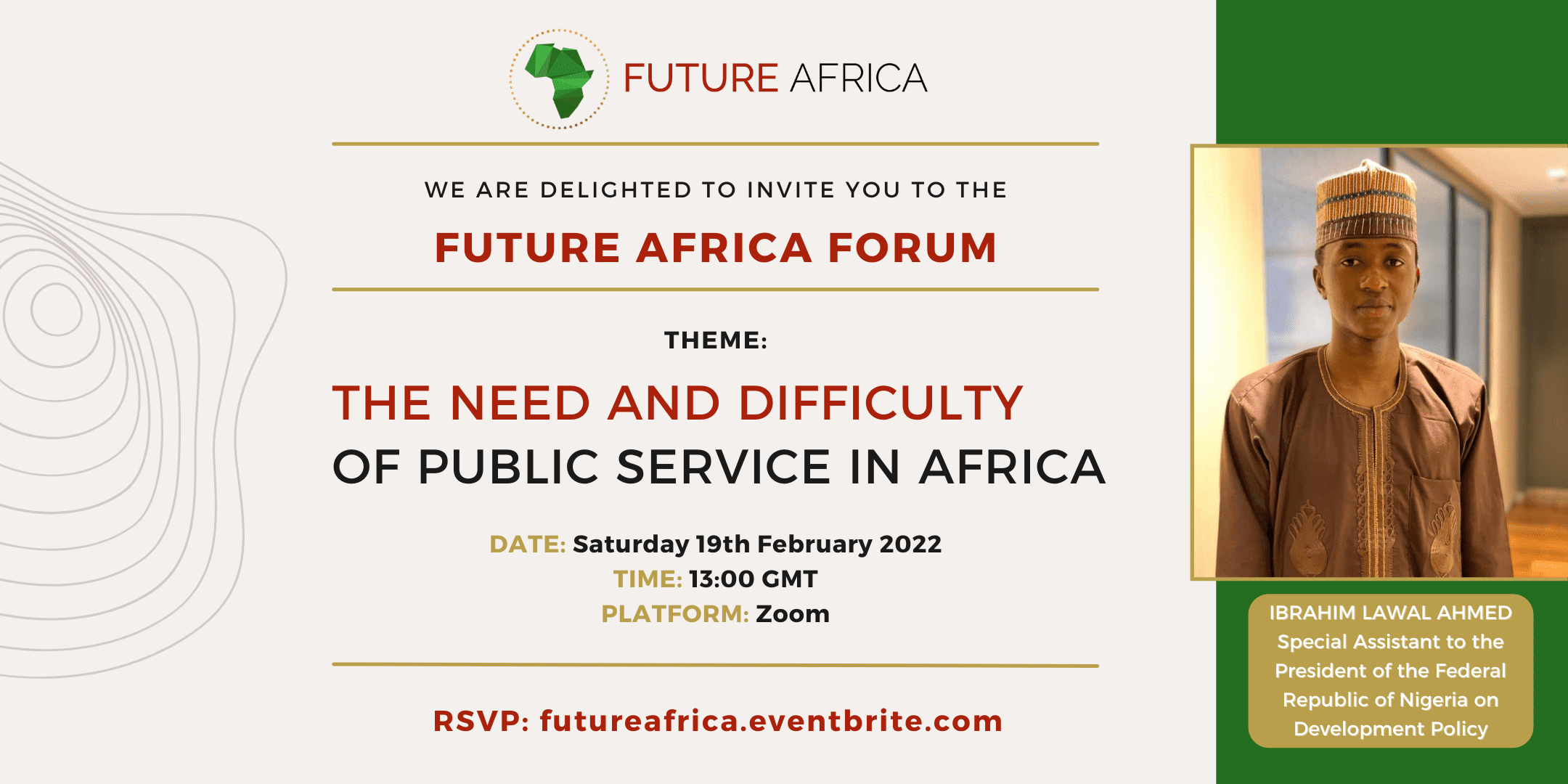 "The Need and Difficulty of Public Service in Africa"

Future Africa is delighted to invite you to the Future Africa Forum, titled: “The Need and Difficulty of Public Service in Africa”. Our speaker is Ibrahim Lawal Ahmed, Special Assistant to the President of the Federal Republic of Nigeria on Development Policy.

The public sector plays a very critical role in administering a government’s agenda in service of its citizens. Public servants, whether elected or appointed, are custodians of the aspirations of all peoples for a good life, for peace and for prosperity. Yet, in spite of the high expectations of public servants, citizen expectations have not always been matched by reality. There remains a very high need for great public servants in Africa despite the immense difficulties that accompany the privilege of service.

Ibrahim Lawal Ahmed is a Special Assistant to the President of the Federal Republic of Nigeria on Development Policy in the Office of the Chief of Staff. His key responsibilities involve receiving sensitive documents sent to the President from various Ministries and Agencies of government, analyzing their content and writing memos; making observations and appropriate recommendations, to inform the President’s decision.

At the age of 25, Ibrahim is currently the youngest Special Assistant to the President who is involved in high-level policy making. He covers policy areas of Agriculture and Rural Development, Water Resources, Labour and Employment, Science, Technology and Innovation, and Education. By virtue of his job designation, he belongs to a number of Presidential Committees mainly in the areas of Food Security, and Science and Technology. Through these Committees, he participates in initiating plans and interventions geared towards providing succor to the populace in view of the economic condition the country is facing largely caused by the Covid-19 pandemic. He is also involved in resolution of inter and intra-Ministerial disputes involving senior government officials and resolving crucial nationwide industrial actions by Labour Unions.

Ibrahim studied Political Science at Bayero University Kano and was a recipient of Late Dr. Tajuddeen Abdulkarim Memorial Award for the Overall Best Student in the Department of Political Science in the 2016/2017 session. He proceeded to undertake his National Youth Service at Savannah Centre for Diplomacy, Democracy and Development, an NGO with a vision of promoting peace and shared prosperity in Africa through advocacy for good governance. He was also involved in creating awareness on the Sustainable Development Goals as part of his Youth Corps Community Service.

Ibrahim has a wide range of study interests cutting across History, Political Thought and Philosophy, Political Economy, Political Violence, Political Psychology, Nation-Building and International Relations. Some of his write ups are published in Intervention – an online Media platform aim at redefining journalism. Ibrahim is an attendant of the 3rd and the 4th Editions of the Ibrahim Mu’azzam Institute of Philosophy and Political Thought.

Join us for the Future Africa Forum as Ibrahim shares about his journey in the public sector and the need and difficulty of public service in Africa.

About the Future Africa Forum

The Future Africa Forum is a periodic seminar series, through which African development experts share perspectives about the continent’s growth trajectory from their research and work. The Forum aims to create broad awareness of the challenges and opportunities for development in Africa, and to enable aspiring public sector leaders to explore various avenues through which these challenges can be addressed.

Key components of the Forum

During the Forum, public sector experts share their insights with our fellows and attendees about their experiences working in governments or international organizations. Following their detailed presentations, participants engage in a Q & A session with the experts to gain first-hand insights into the inner workings of public institutions and their influences in shaping African development.