Bring Back Our Boys – A Call to Action

Nteranya Sanginga and Tetsekela Michelle discuss the case of terrorism in Nigeria and the overwhelming need to effectively address the underlying socio-economic shortcomings that continue to motivate young men to opt into armed banditry and insurgency in Nigeria. How do…
Written By Faith Abiodun and posted on
December 17, 2020
EDITORIAL 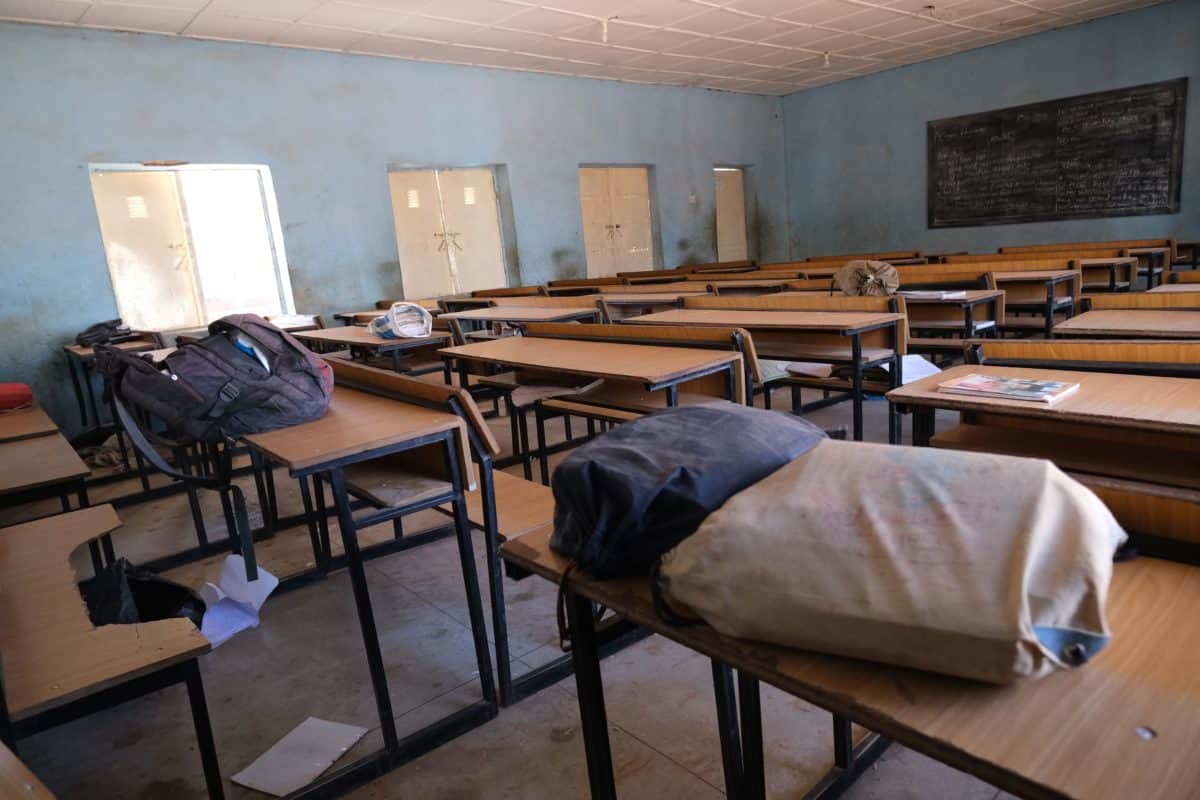 On the 11th of December 2020, over 300 boys in the town of Kankara, in Katsina state, northwestern Nigeria, were abducted during an armed attack at their all-boys Government Science boarding secondary school – a place that is supposed to be a secure environment for children to gain the tools and knowledge needed to pursue their future aspirations.

A gang of armed gunmen on motorcycles reportedly stormed the school on Friday evening. In the midst of the chaos that saw the attackers and security forces exchange open fire, hundreds of students fled and hid in the surrounding forest. While some students managed to escape and 17 have been rescued so far, at least 300 are still missing. Although there is some doubt over who the perpetrators of the attack and kidnapping are, Boko Haram, a radical Islamist terrorist group operating in the region, claimed responsibility.

Meanwhile, the Katsina state government has ordered the closure of all schools in the region and launched a rescue operation. A lingering question is whether efforts will be both effective and sufficient in retrieving the abducted boys, and preventing another abduction from occurring in Katsina or neighbouring states.

According to the Global Terrorism Index (2019), Nigeria is the third-worst nation prone to terrorism, with no improvement since 2017. This is despite having an annual defence budget that is the highest in the West African region. What happened on the evening of the 11th of December is a devastating example of the consequences of a security sector characterised by this irony – seemingly resource-rich but still ill-equipped to manage Nigeria’s security realities.

Unfortunately, this is not the first time Nigerians have experienced such devastation within this decade. The abduction of schoolboys brings back harrowing memories of the abductions of 276 schoolgirls in Chibok, Borno state and 110 schoolgirls in Dapchi, Yobe state, in 2014 and 2018 respectively. Most of the girls are yet to return. These events occurred in different states, but the same circumstances were still very much at play: the scourge of insurgency and armed banditry and the inability of the Nigerian government to put in place a robust security architecture that can, if not eliminate, at least contain, the chronic state of insecurity.

The need to effectively address the underlying socio-economic shortcomings that continue to motivate young men to opt into armed banditry and insurgency remains a primary challenge for Nigeria. Although Boko Haram’s leader, Abubakar Shekau, released a video claiming that the terrorist group was behind the attack, witnesses alternatively attributed responsibility to a group of bandits, who are active in the region where ransom kidnappings are commonplace. Regardless of whoever was behind the attack, what is clear is that disenchanted Nigerians – mainly young men –  have become vulnerable to recruitment into what is now a multilayered network of terrorism and organised crime – operating at the local, national, regional and global levels. For many, this should not come as a surprise. Nigeria just entered its worst recession in three decades, but the socio-economic challenges that have left many people in abject poverty and with no viable prospect for future opportunities – circumstances ripe for recruitment into these networks – have long characterised lived realities in Nigeria.

Complicating this already precarious situation was the onset of the COVID-19 pandemic this year, which saw an increasing number of Nigerians without basic necessities. Eye-witness accounts from the schoolboys that escaped reveal that the gunmen were asking for money and phones and even broke open lockers to take soaps, creams, milk and biscuits. In fact, whilst the President’s Office has revealed that ransom demands are now being made by those responsible, others have suggested that the perpetrators have also sold some of the boys to Boko Haram. Clearly, the motivations for the Kankara kidnappings were more opportunistic than religion-centred. This monetary element at the centre of the abductions suggests that socio-economic inequalities fostered enough grievances to mobilise violent crimes for profit.This is not the first time, and unfortunately, might not be the last time an attack like this occurs if Nigeria does not prioritise structural challenges, especially the lack of basic social amenities and meaningful job opportunities, as primary public policy concerns.

Concurrently, the immediate concern of confronting the present reality of insecurity requires a robust security architecture in order to ensure that attacks like the one in Katsina, Yobe and Borno states do not become commonplace. Complex security situations and the possibility of unexpected attacks like these require the implementation of long-term policy and infrastructure to not only equip security forces with superior military capacity, but to also create effective deployment strategies that identify and monitor existing and potential security hotspots. It also requires effective awareness campaigns for civilian populations, especially in rural communities, in order to effectuate community-centered collaboration such as community reporting and informing as part of the strategy to contextualize and prevent attacks.Though it is important to acknowledge the previous efforts and attempts at confronting the terror of Boko Haram and other forms of organised crime groups, the fact that these groups can confidently repeat a near parallel act of violence and abduction demonstrates the importance of demanding, designing and developing policies, strategies and security structures with the purpose of longevity. Reactive policies and strategies, like post-attack rescue operations, only provide some use in responding to these situations. They do not dispel structural weaknesses, such as under-developed security infrastructure, which allow for groups like Boko Haram to thrive.

Beyond Nigeria, the Kankara kidnapping is yet another unfortunate incident that makes demands for African leaders and institutions to  begin to take more seriously the danger to children in areas where there are renowned rebels, militia or violent groups, even more urgent. Nigeria is certainly not alone in witnessing children being placed directly into violence whilst convening at educational institutions. In the past few months alone, children in Cameroon and the Democratic Republic of Congo have faced similar situations. In August, armed militia attacked Congolese examination centres in Haut-Uélé and Sud-Kivu provinces, where final-year female students were raped and hundreds of students were forced to flee from their school premises respectively. In late October, gunmen also raided a school in Koumba, southwestern Cameroon, killing at least 6 children. On a continent where education is arguably the main pathway to securing better futures for African youth, it is imperative to ensure that security strategies incorporate a needs assessment element that visibly targets threat management surrounding educational institutions. This is especially more significant given that African countries remain signatories to the Sustainable Development Goals (SDG) – specifically SDG 4 – which aims to “ensure inclusive and equitable quality education and promote lifelong learning opportunities for all” by 2030.

This may be difficult to achieve in the current climate, but these are not impossible undertakings if there is an active commitment to increasing both intellectual and economic investment into the process and implementation of transformative policies on local, national, regional, and even continental levels.

With this in mind, how then can Nigerians demand that their leaders bring back the boys, and by extension bring stability and security? How can Africans join this call to action so that leaders across the continent can also pursue integrative and transformative measures with long-term impacts on national and regional stability?

It is important to note that this article was written on 17 December 2020, prior to the announced release and return of the abducted boys. Whilst this is a welcome development, there needs to be more transparency regarding the negotiations that facilitated the return of the schoolboys, including what exactly informed the speed at which the boys were retrieved – just less than a week after their abductions – especially in light of the girls who are still missing six years on from the Chibok kidnappings. At the same time, the state government needs to address the uncertainty regarding just how many schoolboys were released and just how many were abducted in the first place. Beyond this immediate need to offer clarity to all stakeholders involved, including the parent of the schoolboys and the general public alike, the Kankara kidnappings must spur on the long-overdue renewed focus on the still-missing Chibok girls and the efforts that are being made (if any) to establish a proactive early warning system and a robust security infrastructure to both prevent and respond to possible similar attacks. Thus, the core of this article still stands true – African states, Nigeria included, must move beyond reactive security policies to combat terrorism and establish peace. Instead, more proactive, cross-cutting and long-term policies and actions on national, continental and international scales are called for, in order to maintain peace across time.