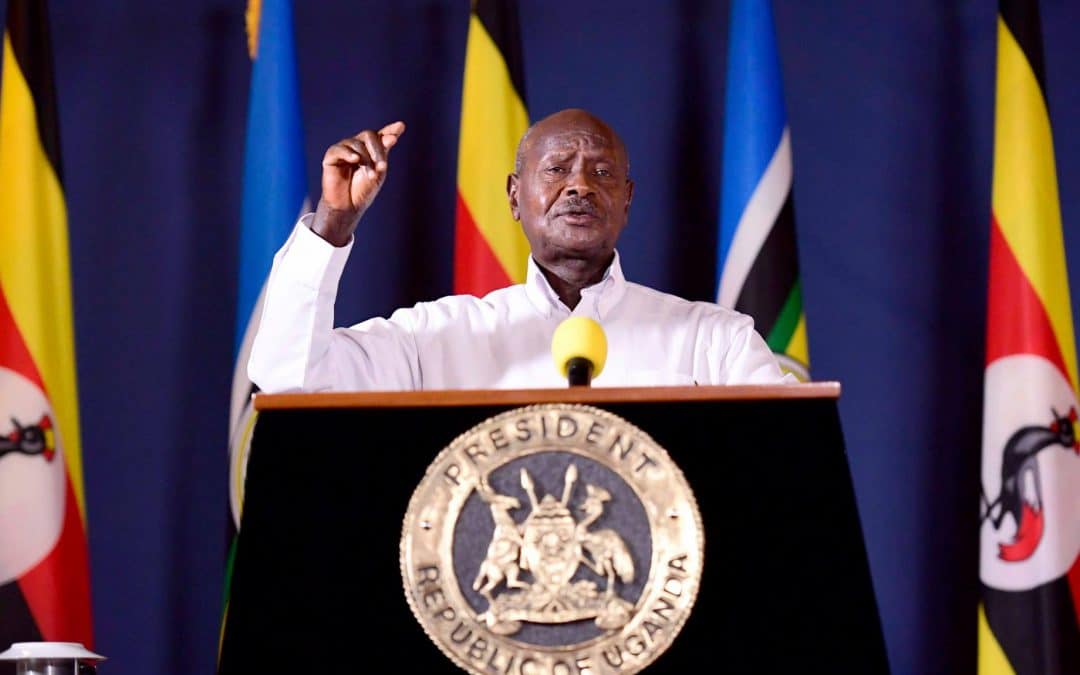 President Yoweri Kaguta Museveni is currently settling into his sixth term of office that will see him ruling the East African nation of Uganda for 40 years. He was sworn in on 12th May, 2021 after one of the deadliest pre-election crackdowns that saw over 30 Ugandan lives lost and his fiercest competition from Robert Kyagulanyi (39) alias Bobi Wine.

The 76-year-old veteran who came to power through an armed uprising in 1986 won the recently concluded elections in January with 53.3% of the vote with Kyagulanyi at 35% after being arrested multiple times during his campaigns giving rise to major questions about the fairness (or lack thereof) of Museveni’s proclaimed victory.

Uganda’s opposition, as has been the trend, boycotted the event.

But the issue in question is not the legitimacy of the election results. Why would a struggling economy with nearly 70 trillion Uganda Shillings (UGX) (21 billion U.S dollars) in debt spend 7 billion UGX (2 million dollars) to inaugurate the same president? Doesn’t every penny count? More on this later.

To put this into context, Uganda’s Finance Minister, Matia Kasaija and his officials have recently pointed out that nation is fast approaching the 50% threshold of the Debt-to-GDP ratio which poses a big risk to the country’s prospective repayment ability. You must know that that higher the debt-to GDP-ratio, the more difficult it is for a country to pay up its external and internal debts which means that in order to borrow more—which Uganda definitely will—the country ought to accept higher interest rates due to low credit ratings among creditors.

The recommended debt-to-GDP ratio from the Joint World Bank-IMF Debt Sustainability Framework for Low-Income Countries is 50 per cent. Uganda is fast approaching this threshold with an estimated crossover point somewhere set somewhere in 2022. However, countries like Kenya (which is already at a high risk of debt distress—where a country is unable to fulfill its financial obligations and debt restructuring is required) are way past it but on the other hand, some of them have strong inclinations towards domestic revenue mobilization, something Uganda is grappling with.

Ultimately, all this sets Uganda on the path to debt distress of which the risk is currently low, but may in the long run change.

Let us get back to the inauguration expenditures for a moment. The accumulated public debt in Uganda, which is nearly 70 trillion UGX as earlier noted—in the final analysis—means that of the estimated 43 million Ugandans, each one owes 1.5 million Uganda Shillings ($430). Why is it that a developing country so drowned in debt is spending billions on an inauguration of someone who will go back to the same house and office he has been in for 35 years? At least if it was someone knew this would be understandable and worth the celebration.

There was nothing to celebrate about the incumbent handing over power to himself. What this reemphasizes to the Ugandan people is that their President is so focused on retaining his seat that he will use much needed public funds during a time of economic downturn, to have a party. Let alone the fact that the event was attended by hundreds of people in clear violation of Covid-19 SOPs. If this was a celebration of any kind by the opposition, try to imagine what would happen.