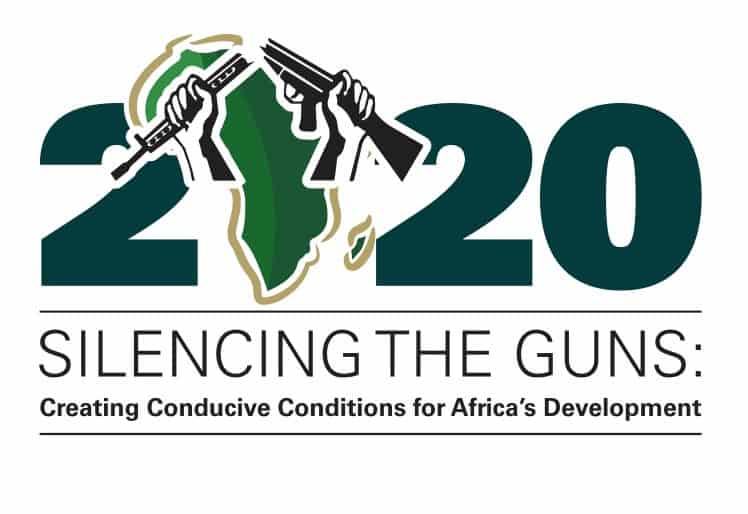 Silencing the Guns in Africa: How Feasible?

The fourth aspiration of the African Union Agenda 2063 highlighted the establishment of a peaceful and secure Africa, characterized by conflict prevention means that are centered on dialogue alongside conflict management and resolution with the end goal of silencing guns. However, there is minimal visibility on member state programs that ensure the effective implementation of efforts towards silencing the gun, on a national and regional scope . As most of the small arms and light weapons are currently found within the Chad Basin, Central African Region, Eastern Congo, the Horn of Africa, Sudan, South Sudan and Libya, this calls upon inclusive collaborative and coordinated endeavors by both peaceful and conflict prone states.

Through outlining enhanced realistic, practical and time bound implementable steps towards silencing guns, member states can further increase their campaign efforts and meet the target date of 2025. Furthermore, it is anticipated that national governments will commit to taking ownership of the silencing the guns initiative and the realization of subsequent national plans.

The Silencing of the Guns initiative contains the following aspects that obliges the consideration of:

The following risks occurred during the course of implementation and continue to threaten overall inclusivity of member states;

The project will have a direct impact on the following target beneficiaries:

STATEMENT OF THE PROBLEM

The current dilemma that impedes the realization of a peaceful and secure Africa according to the fourth aspiration of the AU agenda is conflict. Conflict is propagated by the illicit inflow, proliferation and circulation of small arms and light weapons within the continent. In addition, failure of member states to accept national ownership of the initiative, and its subsequent implementation of national and regional action plans and mechanisms, has further facilitated the proliferation of small arms and light weapons. This is also due to a deficit of political will and the appropriate, well-structured leadership needed to support the initiative and its activities.

The project succeeded in initiating the following changes within the relevant target beneficiaries:

In 2017, to ensure its further implementation, the AU heads of state and the Peace and Security Council deployed a team to verify the ASF’s operational readiness while identifying gaps and challenges. the teams overall conclusion displayed significant progress made within the Western, Southern and Eastern standby forces, however, the Central and North Africa regions had lagged behind.

One recommendation to ensure equal and enhanced operationalization is through bridging regional gaps between member states. For instance, through the creation of ad hoc regional instruments such as the G5 Sahel Joint Force in the Sahel and the Multinational Joint Task Force (MNJTF) tackling Boko Haram, whereby each contains members from both ECOWAS and ECCAS.

Established constructive early warning response capacities for member states and regional economic communities. It commenced on a national level, enabling member states to establish and enhance pre-existing capacities and link them to their respective regional economic communities. An example of this is, IGAD’s unique pursuit in conflict prevention management resolution through the conflict early warning response mechanism (CEWARN). An institution that investigated peace and security at a lower level in member states. Furthermore, sensitized on the importance of the use of the African Union structural vulnerability assessment tool as a means for identification and proper evaluation.

A recommended approach is through the enhanced operationalization of the continental early warning systems (CEWS) Through ensuring coordination of the overall observation and monitoring center (Situation room) at headquarter level has better and clear communication channels with the regional observation and monitoring units within the respective regional economic communities. This alongside bolstering political will amongst member states to be proactive on early warnings while enhancing normative frameworks on a continental and regional level.

Member states collected, verified, and provided information to the Peace Security Council on those involved in the trade. They also, established inquiry groups within the regional economic communities whenever intelligence surfaces regarding country of origin, transit and destination of the weapons was disclosed. In addition, member states upgraded national capacities to identify, subjugate and destroy illicit weapons. The AU encouraged naming and shaming suppliers and recipients of illicit arms at a summit level alongside imposing bans on member states discovered to be engaged in illicit inflow of weapons, in line with the Arms Trade Treaty.

A recommended method to further achieve this is reinforced and expansive research on illicit arms flow in different regions. This can occur through cooperating to generate assessments that fill knowledge gaps and are adaptive to the evolutionary nature of illicit flow of small arms and weapons. The research should cut across thematic areas such as multiple gender dimensions, driving factors, and roles played by border populations and armed groups in illicit inflow of arms. Consequently, this kind of data collection and sharing will provide valuable insights, supplement intelligence gathering and information sharing between member states.

Prevented access to small arms and light weapons by non-state armed groups, such as rebel groups and insurgent groups alongside warring communities. In addition, ensuring the Peace Security Council incorporates and draws attention to the emerging trends and flow of small arms and light weapons in conflict zones. As well as, ensuring member states focused on necessary capacity building to establish and support national institutions that were tasked with illicit arms recovery and detection. Moreover, guaranteeing the state has concrete capabilities to secure confiscated arms stockpile.

One recommended approach, is through development of practical tools and guidance by improving for management of state owned weapons in accordance with the international standards, such as the Modular Small-arms-control Implementation Compendium (MOSAIC) and International Ammunition Technical Guidelines (IATG). As well as, developing joint border commissions and enhancing sub regional cross border security strategies. For instance, Chad and Sudan formed a Joint Border Force that focused on populous areas on their shared border and were able to build trust through continuous provision of medical and educational assistance. Consequently, it led to information gathering that unraveled and decreased the rate of arms trafficking in the region.

Facilitated faith-based organizations active engagement with the cooperation of religious leaders. This occurred through encouraging inter and intra-religious constructive dialogue to build religious tolerance with the goal of preventing terrorism, violent extremism, and radicalization. As well as, initiating a platform for gathering religious leaders and engaging them on the importance of counterterrorism as a means to curb the illicit proliferation of arms.

A recommended approach is through community policies that are context specific and have multiple gender dimensions that highlight the potential role of women and girls in preventing terrorism and countering violent extremism. Thus, enhancing their role in raising awareness in their communities and control measures such as risk education sessions amongst their communities.

Developed national mechanisms to assist in implementation of the DDR and SSR initiatives. The regional economic communities assisted in attaining and sustaining technical and operational assistance by recruiting experts. Furthermore, regional economic communities implemented the AU-UN joint call for declaring September the Amnesty month that allows for continuous voluntary surrender of illegal SALW. In addition, the Regional Centre on Small Arms worked in unison alongside global donor support to aid in substantial activities such as raising awareness, capacity building of security sector, weapons collection, safe storage and destruction. it has been done in seven African states including Ethiopia, Cote d’ Ivoire, Cameroon, Kenya, Central African Republic, DRC and Burkina Faso.

Some recommendations to further enhance these efforts could be through identification and disposal of larger caliber material including light and heavy weapons, related ammunition, and explosives. Alongside this, the establishment of strong national legal and institutional DDR frameworks and the adoption of standards of procedures which will inherently guide weapons and ammunitions management.

In summary, the project displayed the target beneficiaries at all levels from local, national, regional and continental levels, thus, demonstrating its capability to directly and indirectly impact the concerned actors. In addition, the project has significantly highlighted problems that hinder the initiative’s successful implementation such as proliferation of small arms and light weapons, violent extremism and inadequate disarmament demobilization and reintegration programs. As a result, it has offered recommendations to be considered by the relevant stakeholders. For example, the project formulated recommendations that mostly targeted the integral components of the African Peace Security Architecture such as the continental early warning system, the African Standby Force, and the peace fund, based on identification of gaps in their respective policy implementation.

Moreover, the initiative requires enhanced continental diplomatic outreach and building of partnerships in the pursuit of peace and security in Africa. Hence, the project is targeted towards improvement of continental frameworks and institutions for responding to insecurity and efforts to curb the proliferation of small arms and light weapons. Alongside this, some cardinal points to be mindful of are the overall need for dialogue centered conflict prevention, and the management and resolution of existing conflicts.

Undoubtedly, noteworthy progress continues to be made with the realization of the initiative. however, there is still need for more consolidation of efforts by member states to enact it fully. Inevitably, this heavily relies on member states discretion, political will and cohesion to ensure they play an equal and active role to its realization. Particularly, when the gruesome reality displays numerous African states still consumed by a ruthless cycle of violent conflicts and are subject to its fatal consequences. Undoubtedly, as the Sierra Leone Ambassador to the AU candidly phrased: “If we fail to silence the guns on the continent, then, even Agenda 2063 will remain a myth.”

Anita Mugo, a citizen of Kenya, was a member of the Future Africa Fellowship 2021 cohort. This policy proposal was written in partial fulfilment of the completion requirements of the Fellowship.